While we often think of dehumidifiers being used in homes or businesses, museums and historic buildings need to utilize dehumidifiers, as well. This was true for the National Archives in Washington, DC in 2006, when it experienced torrential rain and flooding. Home to countless important artifacts, such as the Declaration of Independence and recordings from the Oval Office, water damage could be disastrous.

In 1926, the Public Buildings act was passed, which authorized the building of several federal buildings in downtown DC, including the National Archives. A few years later, after several site changes, John Russell Pope, an architect from New York, was selected to design the National Archives. It was Pope who suggested the location the Archives now occupy- 700 Pennsylvania Avenue, NW Washington, DC 20408. Unfortunately, the site he chose had been used for farmers markets since 1801, and currently was occupied by the Central Market building. In 1931, the Central Market building was demolished and John Russell Pope’s elaborate plans for the National Archives were approved by the building commission. Finally, on September 5, 1931 the excavation for the National Archives began. The Archives turned out to be much more complicated than the other Federal buildings that had been constructed in recent years. Not only did it have complicated decorations, but precautions needed to be taken to protect the important pieces inside. For instance, the flooring was reinforced and customized air handling units were installed. 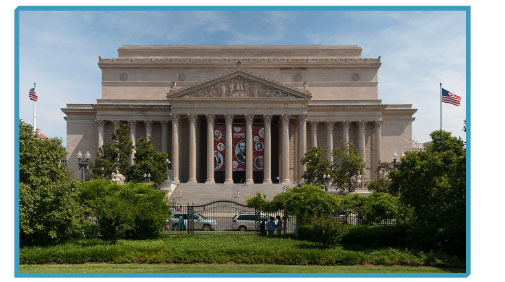 In 1935, employees moved into the incomplete Archives building and began working. Two years later, the National Archives Building, was at last finished. When it was completed in 1937, the Archives held the Bill of Rights but the Constitution and Declaration of Independence were still at the Library of Congress. In 1952, both documents were finally moved to the archives. All three documents, jointly known as the Charters of Freedom, were placed in hermetically sealed cases for protection. Over the following decades, the building underwent several improvements and renovations. In 2001, during a large renovation, the Charters of Freedom were upgraded to new and improved cases. It was also during this time, that the theatre was moved from the 5th floor to the lower level and reopened as the William G. McGowan Theatre. 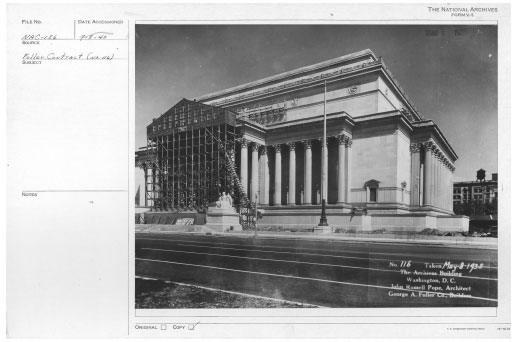 In 2006, the National Archives building experienced an unexpected setback. On June 25, there was heavy rainfall in Washington D.C. Soon, the storm drains were overwhelmed, streets were flooded and the water entered the National Archives. The lower areas of the building were completely flooded. This included transformer vaults, sub-basement areas, and the newly renovated William G. McGowan Theatre. Tim Edwards, a building facilities manager at the National Archives watched the water flow through the metal gates and wooden doors into the basement. Edwards noted that the water kept pouring in until it eventually flooded the entire McGowan theatre, covering many of the seats. Inside the transformer vaults, Tim pointed out that you could see the water line from the flood, which was taller than him. The large electrical transformers had been completely swamped by the water.

The massive flooding shouldn’t have been too surprising. The National Archives Building is actually located in a low spot of Washington D.C.. The area has a history of flooding with several major storms recorded as far back as 1889. 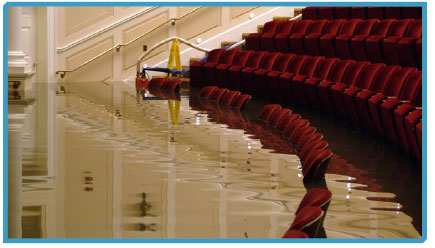 While there was significant damage to the affected areas, the good news was that no original records were compromised. The restoration process began immediately, with crews working around the clock. The first step was to remove all of the standing water. This was finished two days later, on June 27th. Next, workers used powerful dehumidifiers to remove any remaining moisture and help regulate the environment. Once the moisture was taken care of, the building systems, such as electrical and climate control, were repaired. Repairing the building systems quickly was crucial as they aided in maintaining the humidity in the building. While the records may have survived the flooding, sitting in a highly humid environment for days could be just as devastating.

Dehumidifiers are actually quite an effective method for restoration. After the excess, standing water has been removed, typically the items and furnishings in the room can be left in place while dehumidifying. In addition, using large dehumidifiers to dry out items can avoid the hassle and cost of removing items to dry in a vacuum chamber or freezer. During the dehumidification process, the temperature and humidity in the room can be carefully controlled to maintain a stable environment and ensure items are properly restored.

After the severe storm of 2006, new flood plain maps were created that showed the National Archives building directly in the center of the flood zone. The National Archives was also quick to enact preventative measures for the future. For instance, all of the exterior doors are now waterproofed, and brick walls were built around the air intake system. Plus, there are now two flood walls that will automatically rise when the storm drains are full of water. While nothing of significance was lost during the 2006 storm, it was a wake up call that important documents need to be protected. Now, nothing of value is stored in the lower levels. In fact, all documents now sit over 20 feet above street level. 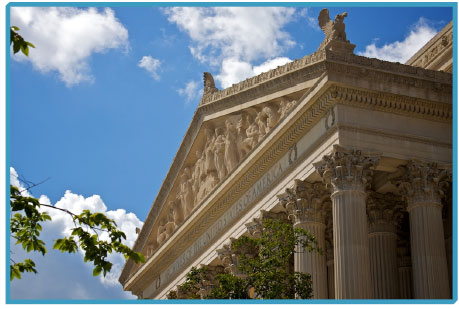