How Does Humidity Effect Bacteria and Viruses?


Given recent events, people are becoming more aware of bacteria, viruses, and how they spread. The question is what role does humidity play in spreading bacteria and viruses? A 1986 research study on the health effects of relative humidity in indoor environments examines this question in great detail.

Transmission of diseases in an indoor environment may happen one of three ways- through airborne particles, through direct contact with pathogens on hard surfaces, or by touching the infected person. The latter is thought to be the most common way of transmission which incidentally is not affected by relative humidity. Relative humidity does affect the other two methods of transmission.

In regards to transmission from hard surfaces, various studies have shown that relative humidity does affect the survival of bacteria and viruses. For instance, low relative humidity makes it more likely for rhinovirus, human rotavirus, and influenza to survive on surfaces, such as furniture or desks.

Transmission through airborne particles has also been examined through several research studies. In an indoor environment, transmission is affected by 6 factors. Some of these factors include the number of contaminated people in the building, the ventilation rate, the settling rate of contaminated aerosols, and the survival of pathogens attached to aerosols. The indoor relative humidity could influence the settling rate of aerosols and the survival of pathogens. This means that the significance of relative humidity will vary depending on how much those two factors are an issue in the space.

In an environment with low humidity, the dry air can cause rapid evaporation that reduces the diameter of the aerosol so much that it no longer remains in suspension. Alternatively, in humidity that exceeds 80%, the size can increase rapidly as it absorbs water. This causes the settling rate to be higher and is a decrease in aerosols compared to low humidity. A mid-range relative humidity has a minimal effect on settling rates and doesn’t significantly change the size of the aerosol.

A low humidity environment is generally going to cause the most issues. Low humidity is most common during the winter, which is also when buildings are likely to have higher occupancy and less ventilation. Furthermore, a dry environment leads to more coughing and exhaling which produces more infective aerosols for the environment.

The other factor that humidity changes is the survival of airborne pathogens. This occurs because different humidity levels can alter the integrity of the viral coat or cell wall. The airborne pathogens can be divided into two categories- bacteria and viruses.

When it comes to bacteria, nonpathogenic bacteria such as E. Coli have been studied quite a bit. Results show that a humidity level somewhere between 40% and 60% is the most effective at killing bacteria. When exposed to low humidity or high humidity, bacteria are more likely to survive. For instance, Mycoplasma pneumoniae, an airborne bacteria that is nonpathogenic, survives much longer during exposure to high humidity or low humidity. Other nonpathogenic bacteria such as Brucella suis and Staphylococcus albus have the greatest chance of survival at high humidities.

In addition to bacteria, viruses are also airborne pathogens that can be affected by relative humidity. Examples of airborne viruses include rubella, measles, and influenza. After reviewing multiple studies, it appears that viruses are similar to bacteria and prefer either high or low humidity. Viruses composed of nucleic acids and proteins prefer high humidity while viruses composed of lipids prefer low humidity. For example, one study showed that influenza rates increase when relative humidity is below 40% but then decrease dramatically between 40% and 50%.

Overall, the ideal humidity range for an indoor environment appears to be 40%- 60%. Extremely high or extremely low rates of humidity will increase the spread of bacteria and viruses. Even factoring other issues, such as fungi or mites (as shown in the chart), between 40% and 60% is still the best humidity range.

For more information on this topic— https://seairaglobal.com/blog/humidity/health-effects-of-humidity.php 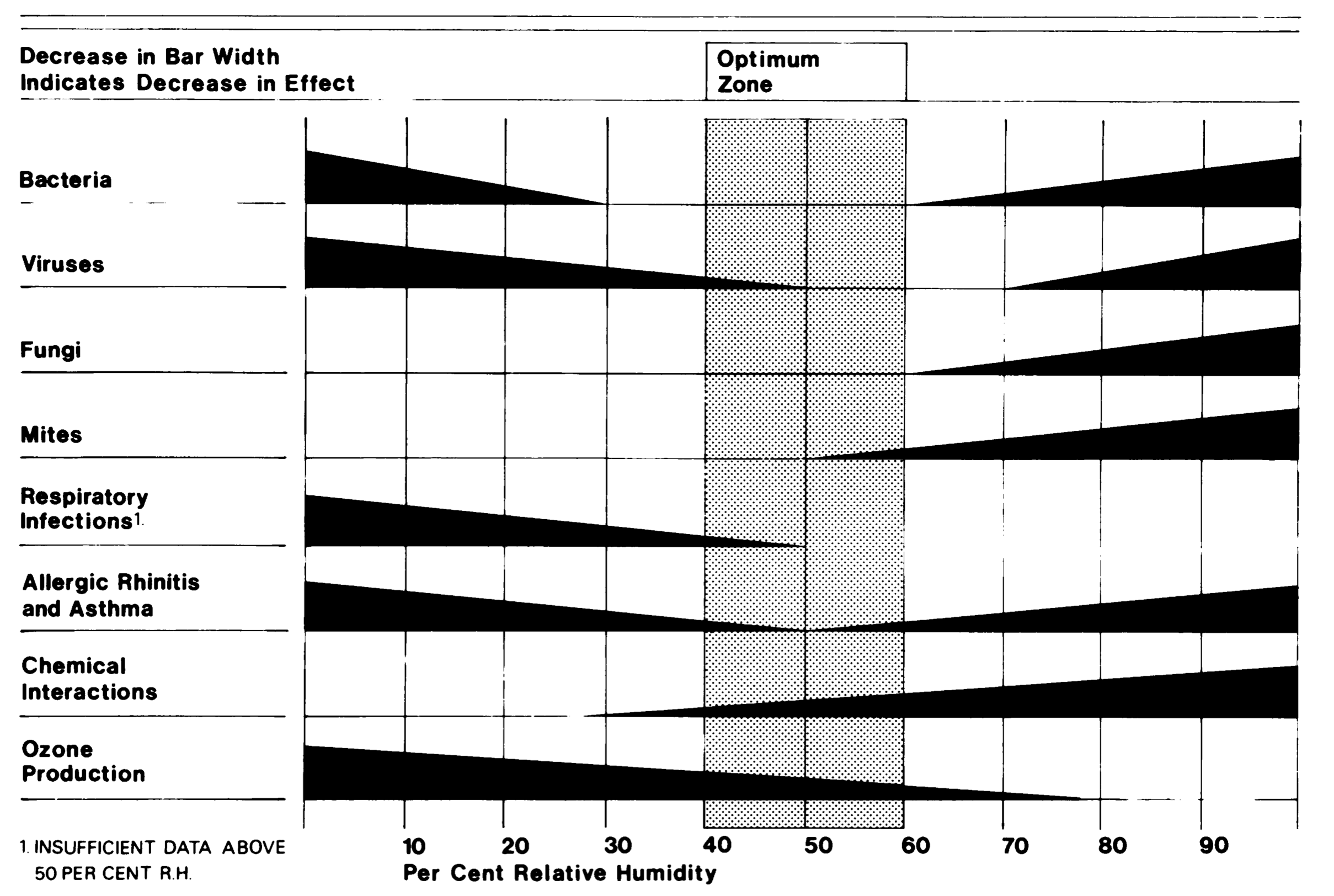