No matter what type of environment you are in, it’s vital to keep the humidity levels stable. As you’re probably aware, you need to maintain the humidity in your home to keep your family healthy from factors like mold, sickness, and allergies. Maintaining the humidity is also crucial for protecting the structure of your home. High humidity can create countless problems including warped floor boards, damaged foundation, and pest infestation. These humidity problems aren’t just limited to homes, of course. As you’ll see in this article, humidity levels are necessary for the preservation and maintenance of a 16th century warship, too. 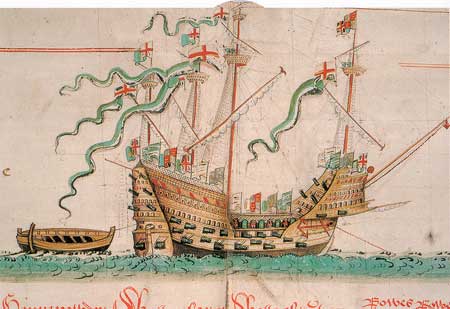 
History of the Mary Rose

Despite a couple of unsuccessful excavation attempts, the Mary Rose stayed 15 meters under water, undisturbed for hundreds of years. Initially, the wooden hull was eroded underwater from many factors such as marine bacteria and abrasive silt flowing past. Eventually, however, the ship was buried in sediment which protected the rest of the ship and many of the artifacts from damage. Not only was the sediment a layer of physical protection but it also created an environment with no oxygen. Having an environment with no oxygen prevents many chemical reactions, such as corrosion, from occurring that could have been detrimental to the ship. Furthermore, the layer of sediment stopped many organisms from entering and feeding on materials on the ships.

Finally, in 1971, the Mary Rose was rediscovered and plans started to form to excavate the ship. Before the ship was moved, teams began bringing up the artifacts, which eventually numbered 19,000. Eleven years later, in 1982, the hull of the Mary Rose was at last raised from the bottom of the ocean to the Portsmouth Dock Yard on live TV. 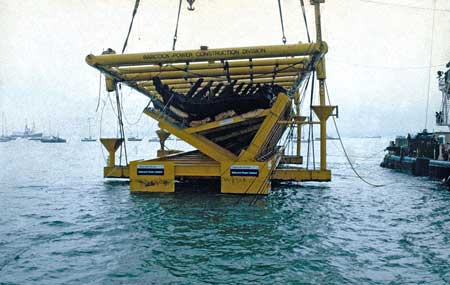 The Mary Rose Being Lifted from the Ocean in 1982 Source: Mary Rose Salvage

Once the ship was excavated, the challenging process of preservation began. As you may recall, when something is constantly wet and humid, there are harmful side effects that occur. Wood can swell, change shape, and generally deteriorate, which wouldn’t be good for the timbers of a historical ship. In addition, all of the priceless artifacts, made of textiles, leather, and metal, could experience accelerated corrosion and decay, if subjected to a highly humid environment. Furthermore, high humidity brings other unfortunate factors, such as mold and pests. 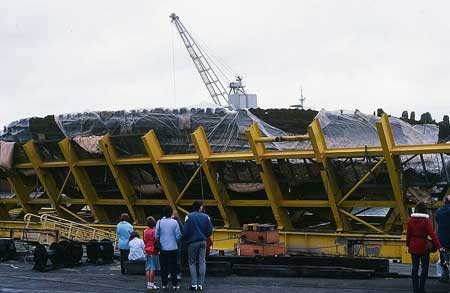 The Mary Rose Arriving at the Portsmouth Dock in 1982 Source: Glenluwin

Allowing a historic ship to deteriorate because of high humidity obviously wasn’t an option, so a preservation plan needed to be determined. After being excavated, the Mary Rose was placed under a tensile, fabric enclosure, but this didn’t provide nearly enough protection. As soon as the ship was lifted from the protective layer of sediment under the ocean, she was vulnerable to the elements. Further complicating the preservation process for the Mary Rose team, was the fact that top layer of cells of the hull had been compromised underwater. While the majority of the ship had been relatively well preserved by the layer of sediment, the top layer of the hull had been damaged prior to this. Now the cells on the top layer were almost completely filled with water, and only the outer wall of the cells remained. This meant that the surface layer of wood on the hull was extremely soft, spongy, and fragile. Thus, while drying is crucial to preservation, if the hull of the ship was completely dried, the structure would be compromised and it could shrink up to 50%.

The temporary solution to this problem was to keep the hull wet. From 1982 to 1994, the Mary Rose was sprayed with chilled, sterilized water. Then, in 1994, they moved on to the next step, as the spray was switched to polymer polyethylene glycol (PEG). The idea for using PEG, a wax that is soluble in water but solidifies in air, came from the Vasa, a Swedish war ship that was also being preserved. The advantage of spraying with a PEG solution is that it would eventually replace the water in the top layer of cells. Since PEG solidifies, it’s a much more secure option than water.

To accomplish the switch between water-filled cells and more stable PEG cells, the preservation team first sprayed the ship with a less dense version of PEG (PEG 200). The PEG 200 is liquid at room temperature, which allows it to penetrate into the water layers of the cells. It doesn’t actually solidify though, so it wasn’t the end result. To accomplish solid cells, they switched to spraying a higher density PEG (PEG 2000) in 2006. This version of PEG is actually solid at room temperature, so it’s able to provide better support to the structure. While the PEG spraying occurred, the building process for the Mary Rose museum began. Since it would have been nearly impossible to move the 280 ton section of hull, the museum was actually built around the hull and the tented building. This solved the problem of having to move the ship plus allowed the PEG spray to continue uninterrupted. 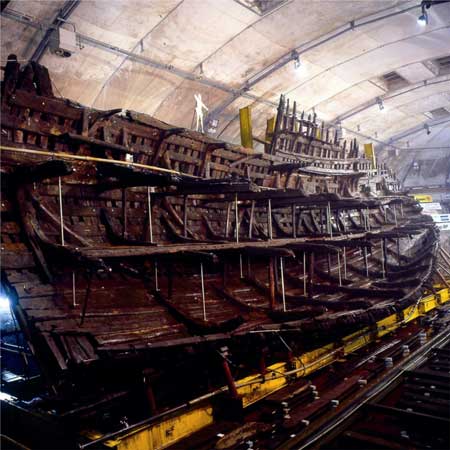 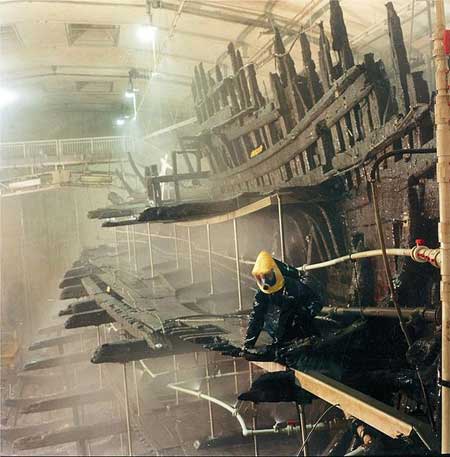 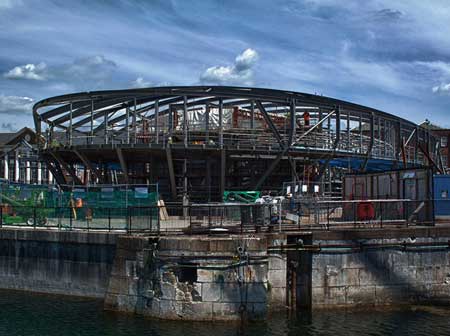 After consistently spraying PEG since 1994, it was finally time to start the drying process in 2013. On April 29, 2013, the sprayers were turned off for good with about 100 tons of water in the Mary Rose hull that needed to be extracted. To facilitate the drying process, three air handling units were installed to provide conditioned air to gradually dry out the ship within it’s airtight chamber. The conditioned air was meticulously maintained at 55% relative humidity (+/-4%) and 18-20°C. It was crucial that the air and temperature be consistent to protect the fragile timbers of the ship. To monitor these factors in detail, the Mary Rose team used 60 custom designed sensors that were attached to the hull of the ship.

The preservation team also installed a network of fabric ducts to carry the conditioned air into the airtight chamber surrounding the hull. Since the Mary Rose is more sensitive than the average building, traditional ducting that allows air to penetrate it’s walls would not be sufficient. Instead, air tight ducting with precise laser cut holes was used to allow for greater control of the air flow. The air holes were so specific that their location was determined by engineers using Computational Fluid Dynamics. 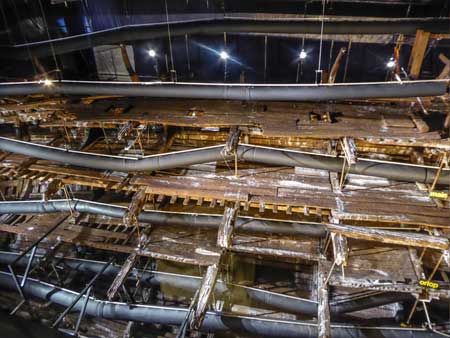 The Mary Rose Museum was opened to the public in 2013. Visitors were able to see the Mary Rose from behind glass walls so she stayed protected during the drying process. On November 30, 2015, it was determined that the Mary Rose was ready to move on to the next phase. The ship was closed temporarily to the public so the walls of the air tight chamber could be replaced with glazing. Prior to reopening in the summer of 2016, the duct work used in the drying process will be removed, as well. This will give visitors never before seen, unobstructed views of the Mary Rose. 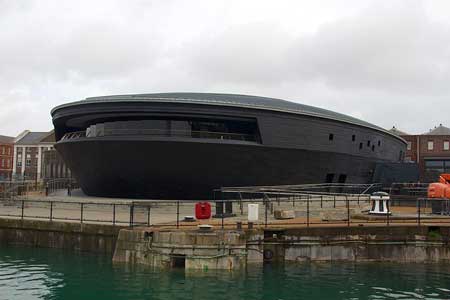 Although the drying process may be complete, humidity and temperature of both the ship and its environment, are still a top priority. If the proper air quality is not maintained, the ship could easily experience symptoms of high humidity, such as warping or cracking. While people will no longer be separated by walls from the ship, they will have to pass through air locks in the walk ways to help maintain air quality. In addition, the same air handling units used during the drying process will continue to be utilized to keep humidity and temperature under control. 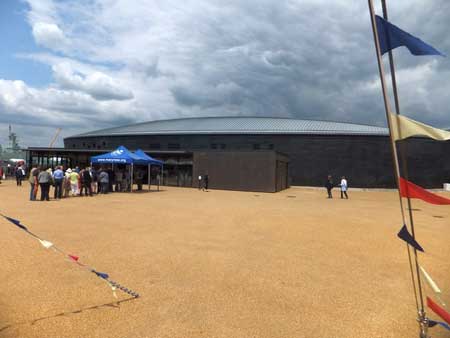