How Do Fire Ants Survive Flooding?

Flooding can be a challenging situation for people to deal with. Now imagine what it’s like for a minuscule fire ant to live through flooding. It turns out fire ants have quite the ingenious solution for flooding- floating. Fire ants are originally from the rain forests of Brazil, where they experienced regular flooding. Over time, they evolved to survive these floods by forming rafts. After the ant colony is flooded, ants move to higher ground, where they link themselves together and form a living raft.

Fire ants are known to form rafts when flooded, but not much is known about how this raft is possible. A 2011 research study completed by the Georgia Institute of Technology sought to learn more about fire ants and their ability to self assemble into a floating mass. Three ant colonies were collected from the roadside in Atlanta, Georgia, and brought into their laboratory for testing. The size of the ants varied from 1 - 4.5mm in length. The average mass of the ants was used to estimate the number of ants in a colony. The ants were then put through a series of tests to help determine how they construct their rafts 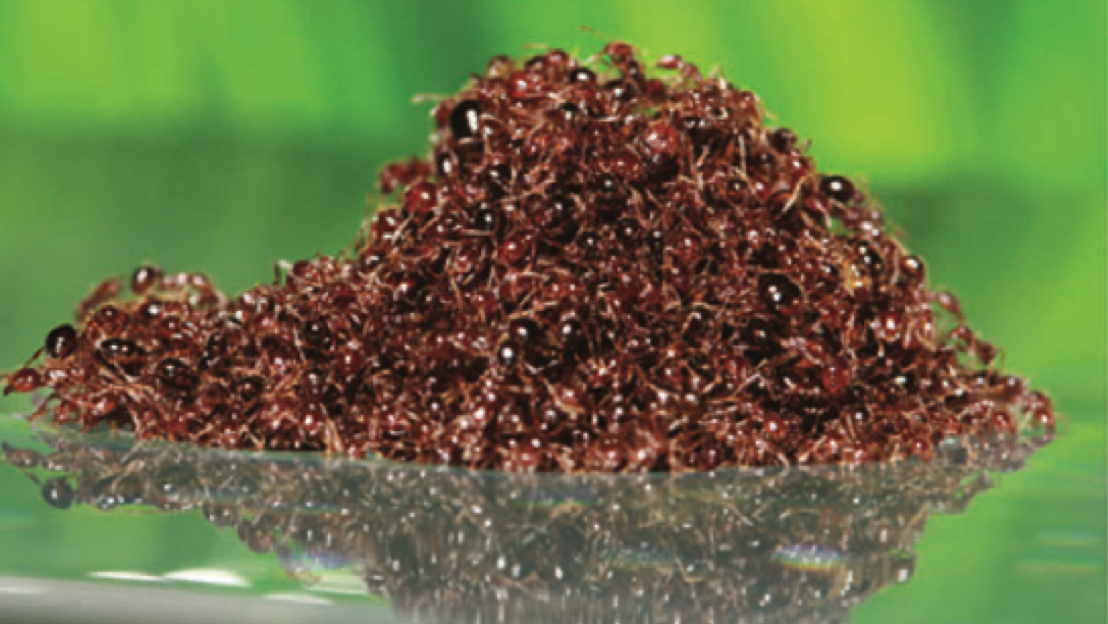 Following the lab tests, more was understood about how fire ants create their rafts. They actively control their arrangement, adjusting the spacing and moving as necessary to keep the raft afloat. Worker ants are constantly moving when they’re in raft formation so that none of the ants are submerged for too long. Workers also hold the eggs in their mouths to keep them safe from the flooding. While the worker ants are moving around the raft, queens stay in the center to be as safe as possible. Ants rely on surface tension to float.

Once grouped, ants are quite difficult to break up. If they are torn apart, the ants can reassemble in approximately 100 seconds. To get a closer look at how the ants grip together, researchers used liquid nitrogen to freeze the ants in place. This revealed that ants grip each other in a variety of ways including tarsal claws, mandibles, and adhesive pads on the end of the tarsi. The most common connection is tarsal. Once joined together, ants can grip more than 400x their body weight. Using their legs as part of the connection is important so that ants can maintain the proper spacing for buoyancy.

There are a variety of factors that make the structure of the raft stronger. For instance, there are multiple ant sizes, which aids in the formation as the smaller ants can fit in between the legs of the larger ants. Furthermore, in all the tests completed, ants connected using all of their legs, 99% of the time. The more time the ants are connected, the stronger the raft is. In addition, ants connect perpendicular to each other which allows them to be more adaptable.

The experiment also showed that ants are slightly hydrophobic. This means that they can trap a layer of air of their bodies. Not only does this repel water, but it also helps the ants float. Ants also use surface tension to help stay afloat. Interestingly, there isn’t enough surface tension for a single ant to float on their own, they only float in a group.

Flooding is a difficult situation for any creature but not many have such a unique solution as fire ants. The ability to self assemble in a raft to protect themselves gives fire ants a much better likelihood of surviving the flood.